The Supreme Court has cleared the way for US lawmakers to access Donald Trump’s tax returns after the former president repeatedly tried to withhold them from a congressional committee investigating his conduct in office.

The brief, unsigned order issued Tuesday means the Democratic-led Ways and Means Committee — which has been requesting the files since 2019 — could get six years of Trump’s tax returns before Republicans take control of the House. committees in January.

The Treasury Department, which oversees the Internal Revenue Service, initially refused to release the documents while Trump was in office, and the former president sued to stop their release under Joe Biden’s administration. He lost both in the district court and on appeal, and then sought the intervention of the Supreme Court.

Trump’s lawyers argued that the committee was too broad in its requests and should only review a year’s worth of audit documents.

The former president’s lawyers told the Supreme Court that the appeals court’s decision “implicates a certain level of separation of powers” and that if overturned, it would have “far-reaching consequences.” Chief Justice John Roberts ordered a temporary halt to the Treasury Department’s document handover a week before midterm elections earlier this month.

Republicans won a slim majority in the House of Representatives, while Democrats retained control of the Senate. Days later, Trump announced he would run for president again in 2024, prompting the Biden administration to appoint a special counsel to oversee investigations into the former president’s role in the January 6, 2021 riots on Capitol Hill. and the preservation of secret documents. Mar-a-Lago home after leaving the office. 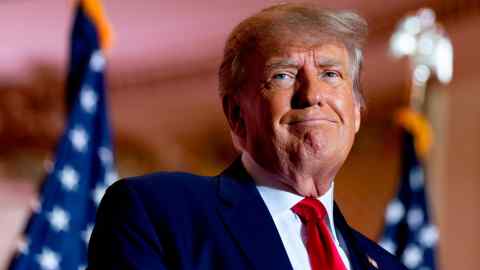 The high court order was Trump’s second high court defeat in a matter of weeks, after justices in October rejected the former president’s attempt to intervene in a legal battle over an FBI search of his Florida home. The order comes amid other developments in mounting legal challenges against him, his family and businesses, including a criminal tax-evasion case against the Trump Organization that is nearing completion in Manhattan.

Separately on Tuesday, a federal appeals court heard arguments from the US government and Trump’s lawyer on whether an independent special master should continue to oversee documents seized by investigators at his Mar-a-Lago estate.

Trump’s lawyers also appeared in a New York court, where the judge set a preliminary trial date for October 2023 in the lawsuit filed by the state’s attorney general alleging financial fraud committed by the former president and his business entities. Alina Habba, who represents Trump in the case, has indicated that her client may testify at the trial, which will take place a few weeks before the start of the 2024 presidential election season.

But the congressional investigation into Trump’s tax affairs is likely to be dropped within a month when Republicans take control of the House of Representatives. Lawmakers vying to head the Ways and Means Committee — Jason Smith of Missouri, Vern Buchanan of Florida and Adrian Smith of Nebraska — he confirmed to CNBC they would stop the probe if appointed.

Olivier Blanchard: ‘There’s an inclination for markets to give attention to the current and extrapolate it ceaselessly’

According to Putin, Russia can accept the concept of an American pre-emptive strike

We’ve got the latest NFL news for Week 14

Elon Musk shared a rare photo of his son X