Gautam Adani wants to build a global news brand as a sign of the growing influence and growing international ambitions of Asia’s richest man.

In a wide-ranging interview with the Financial Times, Adani highlighted investment plans ranging from launching a “super app” in India to bidding for energy projects in Israel. He also defended the group’s controversial Carmichael coal mine in Australia, but admitted he would not have gone ahead with the development had he known how much opposition it would provoke.

His comments show how ports-power conglomerate Adani – which has growing influence as a founder of Indian Prime Minister Narendra Modi’s development agenda – is expanding abroad and pushing into the media and consumer sectors.

“Why can’t you support a media house to become independent and have a global footprint?” asked the billionaire, whose new media unit launched a hostile takeover of leading Indian broadcaster NDTV in August. “India does not have a single one [outlet] compare with the Financial Times or Al Jazeera.”

At the group’s skyscraper headquarters in Ahmedabad, outside Gujarat’s largest city, Adani said it viewed the NDTV purchase as a “liability” rather than a business opportunity.

Adani Group’s still incomplete takeover bid has sparked debate over media independence in India, with the tycoon believed to be aligning itself with the Modi government, while NDTV is known for airing critical voices.

“Independence means that if the government has done something wrong, you say it is wrong,” Adani said. “At the same time, you have to be brave when the government does the right thing every day. You have to say that too.”

He said the cost of creating an international media group would be “negligible” for the conglomerate and asked NDTV owner-founder Prannoy Roy to stay on as chairman. Adani’s AMG Media Network also bought a stake in business news platform BQ Prime, formerly BloombergQuint, this year.

The surge in the share price of Adani’s companies this year has confounded some analysts as he has grown his wealth faster than any other billionaire. Currently worth $136 billion, Adani is battling tech tycoon Elon Musk and luxury magnate Bernard Arnault in the global wealth rankings, according to Forbes.

Unlike other Indian tycoons, Adani is homegrown. From a commodity trading company founded in 1988, it has expanded its business interests to become India’s largest private infrastructure player with 13 ports and eight airports.

Opposition politicians say Adani is benefiting from his close ties to Modi, a fellow Gujarati. Modi was the Chief Minister of Gujarat for 13 years before becoming the Prime Minister in 2014. Adani rejected allegations of wrongdoing but acknowledged his group was aligned with the government’s development priorities. He said investors are buying into “India’s success story”.

The Adani Group is also India’s largest private coal company, operating mines and coal-fired power plants. But with India’s government ambitiously pushing for a shift to renewable energy sources, the conglomerate has pledged to invest $70 billion by 2030 in technologies ranging from solar panels to green hydrogen production.

In addition to launching a “super app” in the next three to six months to connect Adani airport passengers with other Adani group services, Adani said it plans to invest more than $4 billion in a petrochemical complex at its massive Mundra port and special economic zone. in Gujarat.

“There is a huge demand and there is not enough hydrocarbons in India,” Adani said. He wants to build an ethane cracker, which is part of the industrial process that turns natural gas into plastic, next to a carbon-PVC plant that is already under construction.

Adani denied that the move into petrochemicals would open up serious competition to fellow billionaire Mukesh Ambani, whose Reliance Industries set up an ethane cracker in 2017. “There is no competition,” he said. “India is a huge growth market and everyone is welcome.”

He said the group was “looking at entering the Israeli energy sector” and would “likely” bid for a gas-based energy project. In July, Adani Ports and Israel’s Gadot Group bought the concession for the country’s second largest commercial port, Haifa, for $1.2 billion.

Calling Africa’s east coast a “huge opportunity”, Adani said it would consider “investing in mining and metals” in Africa, while its company is looking at the feasibility of hydrogen production in Morocco and Oman. Adani and the French oil company TotalEnergies signed a $50 billion green hydrogen partnership this year. 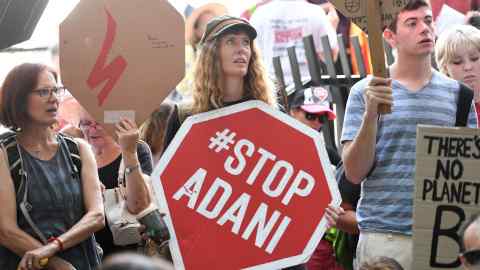 However, he added that in retrospect, given the fierce opposition from environmental activists, he would not have developed it. Adani has struggled to finance and secure the mine, and despite being approved for 60 million tonnes of coal a year, said the mine currently produces only 17 million tonnes.

“If we realized that there would be so much opposition, that there would be so much resistance, we would not be able to enter. We wouldn’t have done that,” Adani said. “But you have to understand that if you’ve already spent $2-3 billion, you’ve got all the approvals that meet the standards, you’ve got government support from both sides, support from local people – do you think every business should come in because somebody’s going to have objections?”

Do you want to be financially free, get rich and retire at the age of 30? Judging by the increasing

Elon Musk shared a rare photo of his son X

A study of twins shows that exercise changes how genes behave